No salon? No problem! Who needs a professional hairstylist when you have your own? Keep reading to find out who the people behind the mirror are!

As the pandemic has forced hair salons and other nonessential businesses across the country to close, WPGA teachers and students have quickly realized that, without intervention, we will soon become a nation of haggard castaways. Google searches for “how to cut your own hair” have multiplied since mid-March, and I can understand why. Over the past couple of months, I’ve been hearing, “Hey, your hair is so long!” and “Wow, you’ve got the quarantine look going.”— by which they really mean, “You look like crap.” Luckily, WPGA has been taking this haircut problem into our own hands. Keep reading to hear about some of the most interesting haircut stories from our school!

First up, we have Mr. McCullough. I am sure that you guys have seen his awesome haircut through the screen, but have you ever wondered who cut his hair?

Introducing our first featured hairdresser: Mrs. McCullough! As it is her first time cutting hair, Mr. McCullough said, “I wasn’t really sure what to expect.”

But you can never be too sure! He says, “I had a back-up plan, which was to just put a guard on my clippers, and just trim it to one length. However, my wife didn’t know this at the time. Due to some translation issues, I had a really bad haircut when I lived in Moscow – I told the hairdresser to start with a #2 on the sides, and leave it a bit longer on top. But she did my whole head with a #2, so it was the shortest haircut that I ever had. I knew that my wife would do better than that,” he continues, “I would say that I mostly trusted her. I did make her watch some YouTube tutorials first, and I did insist that I stay in front of a mirror while my hair was being cut.” Well, you know what they say: when in doubt, ask YouTube!

Now, let’s see how he feels about his new hair! Do you think it went well?

After several busy days on his screen, Dr. Holowka knew that he needed a new cut for the new season! Did you know that he rides motorcycles and plays hockey? Not only is he a tech expert, but he is also athletic! Who says you can’t have the best of both worlds?

Introducing our second hairdresser: Dr. Holowka himself! [Cue the wild screams and applause.] He says, “I cut my own hair and I think it went reasonably well.” Holowka says that he trusted himself, but he has never cut anybody’s hair before.

However, our teacher is more of a risk taker than you think! He mentions, “I’m pragmatic. Hair grows back. The downside of long, hot hair in the summer was worse than the risk of cutting my own hair,” he also adds, “Long hair can look great, but it takes a lot of work and time to do well. My situation is exacerbated by the fact that I ride motorcycles, play hockey, etc. Short hair is really the only practical option for me. Plus, I spend a lot of time outside, so if I grew my hair out in the summer and cut it short in the autumn/winter, I can imagine some ridiculous tan lines on my head. I decided to watch a number of YouTube tutorial videos and went for it. The worst-case scenario of short hair for me was still much better than the tan lines I envisioned. I stand by my decision.”

It is now time for the big reveal! Drum roll please!

Sometimes, we just don’t have a choice but to follow what our parents say. Besides, they know best, right? Mason did not have access to a barber, so he had to let his mom cut his hair. However, his mom needed some help, so his dad decided to pitch in! He says, “It was an interesting process, my mom started, and just made a mess on my head. It was really uneven. My dad then came, and evened it out a little more. At first, I didn’t trust my mom, but my hair was becoming pretty long and messy, so she insisted.” Mason mentions that he did not feel so comfortable during the process, but once in a while, our hairdressers need some moral support, too! He adds, “When my mom cut my hair, […] my grandma was watching, and laughing in the background.” Well, there’s nobody else more supportive in this world besides your laughing grandma!

Are you guys ready for the big reveal? Drum roll, please!

Not all haircuts go so well. If you have ever tried cutting your own hair before, you know that there are slip-ups here and there. Maybe you were jamming to your favorite song, maybe you lost track of where you cut, or maybe cutting hair just isn’t your forte! Sometimes we feel bad, but if you ever need a laugh, keep reading to find out Alex’s story through his original poem.

I cut my hair

I didn’t trust myself

Yes I have done it before

Yes I will do it again (practice makes perfect)

And now, for the big reveal. Drum roll, please! 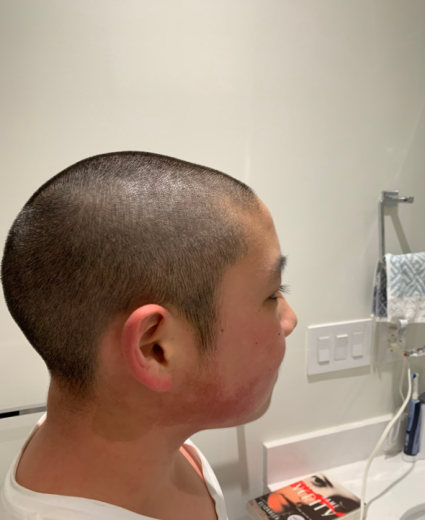 Now, to be a Drama teacher, you have to LOOK like a Drama teacher! Yes, the looks matter! Mr. Macintosh is known for his absolutely astonishing hairstyles! Like they say, “I know looks aren’t everything, but I have them just in case.” We, of course, know that Mr. Macintosh definitely has the perfect look for every English/Drama class!

Featuring our next, successful hairdresser, (who could probably pull off an establishment of his own salon)…Mr. Macintosh himself! [Cue the cheers and applause.]

Yes, you read it correctly. Mr. Macintosh did cut his own hair! Isn’t that amazing? The secret behind all of his hair phenomena is actually the star himself. Keep reading to find out what his comments are about his new cut.

Mr. Macintosh shares that, “I was pretty pleasantly surprised. I may not go back to professional hair colouring and styling, and save my money instead!” He continues, “When it came to re-bleaching my hair, I wasn’t so much worried about whether I would follow the instructions incorrectly, but whether the product itself would be able to replicate the results I’m used to from professionals (that charge quite a lot of money for the service). As far as cutting my hair myself, I wasn’t entirely sure what to expect but figured I could only do so poorly – and even if I wasn’t super happy with the result, very few people would see it in person and it would always grow back!”

Mr. Macintosh has never cut hair before, besides cutting chunks out of his sister’s hair with safety scissors. Haven’t we all done that? He says, “I was excited to try out colouring and cutting my own hair, though just the tiniest bit worried it might look very obvious I had done it myself (in other words, not great).” He shares his cut step-by-step: “For the bleaching, I grabbed L’Oreal Paris Feria Absolute Platinum from my local Shoppers Drug Mart.” Just to clarify, no, this article is not sponsored. 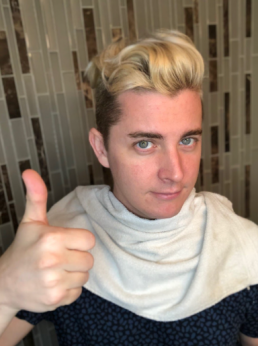 Lastly, Mr. Macintosh gave us some tips for all you risk takers out there in the near future! (Yes, we know you want to cut your hair, too.) He says, “I use electric clippers for the sides and back, and a nice comb and decently sharp scissors for the top. The sides and back I bring down to 1mm near my ears, fading to 3mm closer to the top. I reduce length on the top and add ‘texture’ by grabbing a section with the comb, and then cutting into it with the scissors perpendicular to the comb (this is important, because otherwise you end up with really hard, noticeable “chunks” in the cut). I also use the scissors to clean up the edge between the short cut on the sides and the longer portion on top, because if you go too close to the line with the clippers, you risk taking out a big chunk of the longer part accidentally. The back is the hardest part, but you can hold a hand mirror up and turn your back to the main mirror to see the back of your head, and also just feel around with your hand to create a mental picture of sorts. People spend much less time looking at the back of your head anyway (especially on Zoom!)

Are you ready for his before and after? Personally, I think he looks great with both hairstyles, but what do you think? 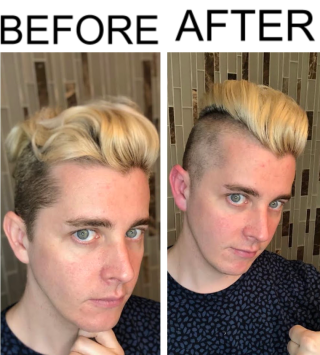 0 comments on “Quarantine Cuts: Behind the Cut (BTC)”